Crusading Realism: The Bush Doctrine and American Core Values After 9/11 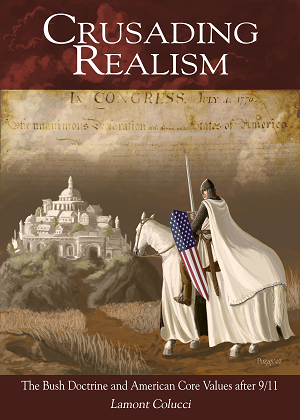 Crusading Realism discusses the presidential dominance of American foreign policy and the religiosity and leadership style of President George W. Bush. Contrasting the post-9/11 Bush administration with its earlier incarnation and with that of its immediate predecessor, the development of a distinctive policy position founded on pre-emption, prevention, primacy, and the promotion of democracy is examined.

The emergence of the Bush Doctrine from 2001-2003 is analyzed in relation to four distinct phases: its genesis, initial development, further evolution, and maturation. The Bush Doctrine in this period culminates in the decision to invade Iraq in the light of the heightened sense of threat occasioned by a 'toxic nexus' of trans-national terrorism, weapons of mass destruction, and rogue states. The standard accounts of neo-conservative coup are re-assessed and dismissed. Attempts to characterize the Bush Doctrine in terms of Realism, Idealism or other theories of international relations are considered, and the concept of Crusading Realism returns America to its political roots in the idea of natural law, the American Revolution, and the foundation of the Republic.

Dr. Lothar Seiwert, CSP, is Europe’s leading and most well-known expert in the field of… more

Dr. Lamont Colucci has experience as a diplomat with the U.S. Dept. ofState and is today… more

The National Security Doctrines of the American Presidency

How They Shape Our Present and Future. more

The Impact of 9/11 on Politics and War: The Day that Changed Everything?

Women Getting a Feel for the Game with Former NFL Player Reginald "Reggie" Jones! … more