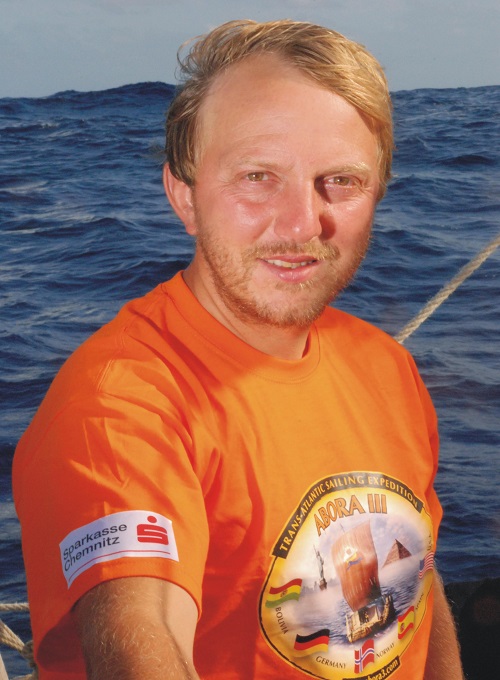 Success is always the result of team work!

Sailing over the rough North Atlantic Sea on a small boat with a team of eleven crew members is a borderline experience that strongly affected experimental archaeologist, extreme sailor and author Dr. Dominique Goerlitz. Such an extreme situation can only be mastered successfully if a well-established team can rely on each other 100 %. Motivation, courage and team spirit are decisive key qualifications – not only on the high seas but in your everyday work routine as well!

The adventurer, scientist and Global Topspeaker Dr. Dominique Goerlitz dared an expedition over the most stormy water way of the world – across the North Atlantic from New York with the heading to Spain. What nobody expected before, he carried out on his daring voyage:

The whole team together on one boat for a common vision in science and society.

The ABORA Team with its extraordinary motivation and courage has demonstrated how enormous feats can be achieved through collaboration, team spirit and the faith in common goal. All this while breaking away from existing preconceptions and traditional beliefs, boldly going against previous scientific evidence. This adventure is not about success at any rate, but about exploring new possibilities through teamwork which an individual would never accomplish. But how do you motivate a team, even in extreme situations, to stick together and perform at maximum efficiency? What makes expeditions like these so appropriate to prove the human quest for enterprise and eventual success?

Global Topspeaker Dr. Dominique Goerlitz is a quite likeable experimental archaeologist with a soft spot for adventures. The New York Times entitled the expedition leader and film maker as the „German Indiana Jones who tried to cross the North Atlantic on a bale of straw“. In his conferral of a doctorate at the University of Erlangen he discussed the trans-Atlantic cultural interactions before Columbus.

His lectures are well illustrated and underpinned by captivating pictures and movies that emphasize the excellent performance of the ABORA crew. In his equally amusing and entertaining multimedia-based speeches he illustrates how to keep your motivation on a mission that lasts several weeks and how to deal with critical situations and changes. His latest expedition in 2013 unraveled one of themost exciting mysteries about the Great Pyramid of Giza. In cooperation with the Freiberg University of Mining and Technology and internationally renowned scientists Goerlitz could prove that even in ancient Egypt people worked with iron.

His adventures are documented in movies and exhibitions that Goerlitz himself arranges. Those productions find favors over many countries. For his extraordinary performances as a speaker and adventurer Dr. Dominique Goerlitz received the 5 Sterne Redner Award in 2011.

All in one boat together - teamwork as a key for success!

Dominique Goerlitz talks in this multi-media presentation about his experiences in the field of motivation and ability to work in a team. … more

The Future was yesterday - what can we learn from the ancient Egyptians?

„It was a fabulous presentation, rich with meaning not just for adventurers but for everyone in their day-to-day lives.”

on Friday. Our customers were thrilled – your presentation bowled them

More 5-Star-Offers of this speaker

For two years now, Global Topspeaker and experimental archaeologist Dominique Goerlitz has been planning the next ABORA expedition. This time, he wants to explore the sea route of the… more

The preparations for the ABORA IV expedition - that will set sail from the Russian city of Sochi within the coming two years - have already been underway since 2016. In order to be… more

Dominique Görlitz on newly discovered cavity in the Pyramid of Cheops

Experimental archaeologist and Global Topspeaker Dominique Görlitz has been studying the Pyramid of Cheops in Giza for years. Now, an international team of researchers has discovered… more

After 48 days: Archaeologist D. Görlitz finally back from Oman

The media is writing about experimental archaeologist and Global Topspeaker Dr. Dominique Görlitz „Archaeologist escapes ‘Pharaoh’s curse’“ and is really hitting the nail on the head:… more

Changed opening hours due to current circumstances:
Mo.–Fr. 8 am – 5 pm